Twitter is full of people who will Follow you for reasons other than why you are on Twitter, and once your account grows closer to that 1,000 Follower mark, it can get tougher and tougher to manage.

Twerpscan does require you to login using your Twitter user information, though Twerpscan creator @Carlo writes:

“This here script does not save your Twitter username or password. It’s a direct communication between you and Twitter. Check the source code if you don’t believe me. :)”

So, if you trust @Carlo, then you just type in your info here:

Twerpscan uses a simple formula to categorize your Followers:
They scan the number of Followers of everyone on your contact list and relate that to the number of people THEY are Following. Your Followers are then ranked based on a ratio of the difference. Ok, that sounds complicated, but the idea is to alert you to Followers who have Follower/Following ratios that don’t fit what you want in a Follower.
The result is a chart that looks something like this: 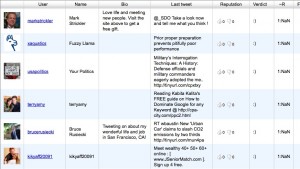 The ratio numbers are customizable, so you can set your own limits and cut-offs. As far as Twitter apps go, this one is great for managing your Follower/Following list once you start to go over 1000. The best way to find out what it’s about is to go to the site and try it out: http://twerpscan.com/