Do it Right: Best Examples of Social Media Implementation

Nowadays you already can’t ignore social media: social media sites influence people’s buying behavior (according to Viral Blog, over 50% of Facebook fans and Twitter followers say they are more likely to buy, recommend than before they were engaged), education choice, even travel plans (according to Timeshare Secrets, one in three people are influenced by social media when planning traveling and two-thirds of the travelers use social media for contact with family).

With so many social media outlets available, how do you determine what is the best social media marketing (SMM) strategy and implementation? There are literally hundreds of choices and millions of combined possibilities.  However, you, as a business owner or social media manager, must boil down the possibilities to form a solid and workable SMM strategy.

To give you a good idea of successful SMM implementations, we’ve chosen a few of the most recognizable businesses and show you how they have successfully integrated a social media strategy. 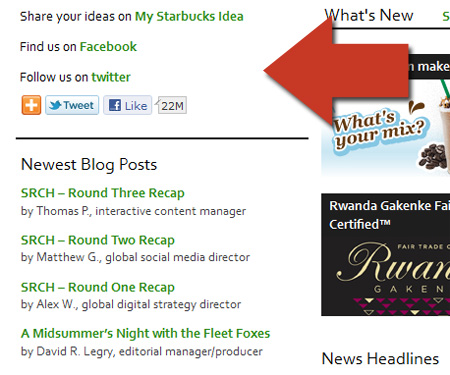 Starbucks Coffee is one of the world’s most popular and recognizable beverage brands. However, while they are found on almost any street corner of any city, Starbucks has still found a way to stay in touch with customers through social media.

First, Starbucks starts with their website. Even on their front page, they offer links to follow them on Twitter and Facebook. They even have an entire web section dedicated to their online community, where you can read real-time posts from Twitter and Facebook, find out what others are saying, and be invited to join the conversations.

In addition to multiple accounts on Twitter and Facebook, Starbucks also has a presence on YouTube, Flickr, and other sites. Their Flickr group allows any Flickr user to add a photo of Starbucks products or locations and explain what Starbucks means to them. This is a great way to engage fan interaction.

Here are links to Starbucks’ social media sites so you can peruse their efforts firsthand: 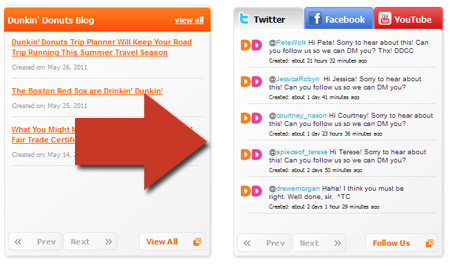 There’s almost no one who doesn’t like donuts. While Dunkin Donuts is the most widely recognized brand of sweet treats in North America, their fame doesn’t stop them from promoting online through social media.

Dunkin Donuts not only collects fans and followers, but they engage them. Right on their own website, they hold promotions for submitting ideas and even creating your own donut. Of course, they invite everyone to join them on Twitter, Facebook, and YouTube.

Every week, Dunkin Donuts chooses a “Fan of the Week” from those who post a picture to their wall. Winners are featured on their Facebook profile icon.  Not only does Dunkin Donuts post frequently on Twitter, they respond individually to Twitter followers.

Here are links to their social sites and accounts: 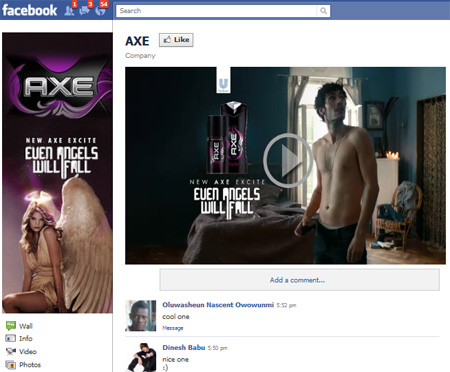 Axe also engages their Twitter community, not only with regular updates, but by responding to individual tweeters. Their presence also encompasses YouTube, Facebook, and MySpace, giving them the exposure to their target market on all the popular social media sites where hip twenty-somethings hang out.

Be inspired by these examples to engage your followers to contribute to your social network endeavors.